Kochi, the biggest city of Shikoku island was full of surprises. The first surprise was our hostel. We didn´t feel more at home anywhere else in Japan than here. Why? Read here.

Surprises Kochi had for us

The whole island is known for its sake. Our visit coincided with an open day of a sake brewery. That means that for a 1000 yen (8€) you can taste around 20 different samples of sake, get a tour of the brewery and an explanation of how sake is made, of course in Japanese, but we had our host with us and he was able to translate the most important stuff. And making booze is quite similar anywhere you go. 🙂 And you get to taste it with one of the most genuine nations in the world. 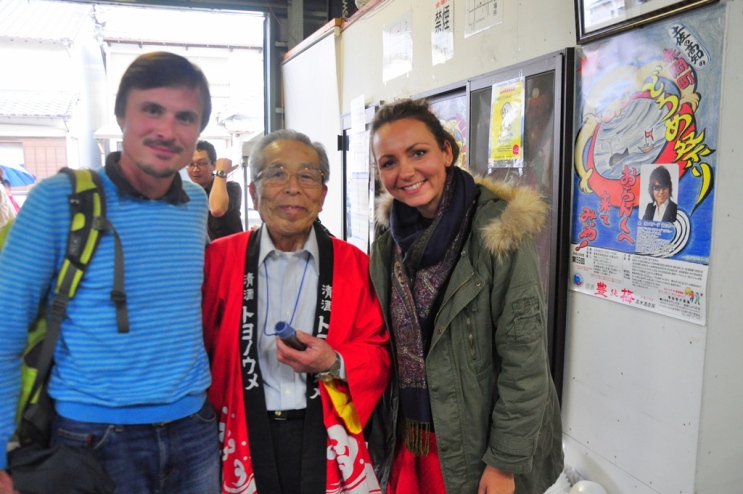 With the sake factory owner

Our guide through the factory 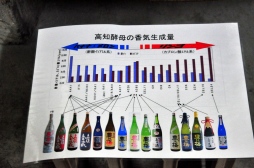 It is located at the heart of the city on a small hill. It is extremely popular in time of sakura (cherry blossom) and the lantern festival. They illuminate the pathways that lead to the castle with paper lanterns and all the blooming cherries are magically shining at night. At this time it does get crowded, but you get to see the Japanese when they are the happiest and most relaxed, having a picnic under a blossoming cherry tree. Join in (ask politely if you may sit on their mat) and you will get “presento” (gift) immediately – you’ll be stuffed with snacks and booze. 🙂 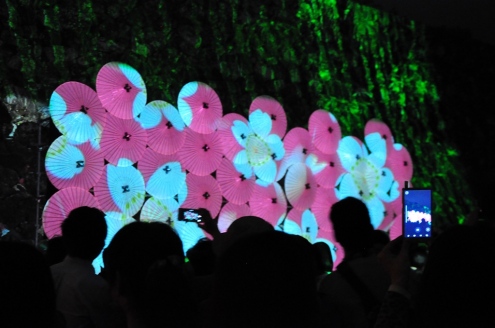 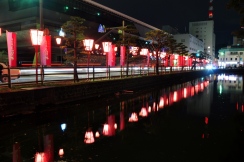 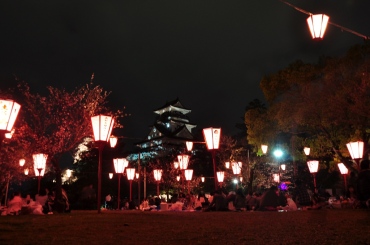 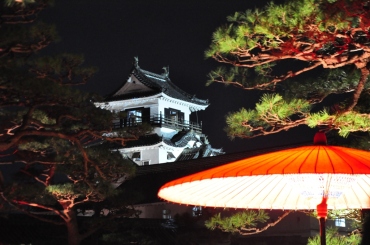 It is easy to get to. Just take the hop on-hop off bus and get off at station number 6. The bus is 500 yen (4€) (which is half price from the normal price, just because you are a tourist, but bring your passport!). The gardens are amazing in sakura time (I don’t doubt it is beautiful also in other seasons). With trees blooming in different shades of white, pink and red it almost seems artificial. At the end (or beginning, depends on where you start) is a greenhouse full of lush tropical greenery. 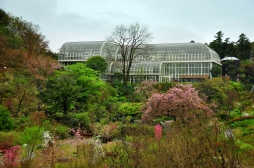 If you’re into pilgrimages, you should know this temple, as it is the 31st of 88 temples of the Shikoku Pilgramage. The temple is known as the temple of learning and as teachers we of course had to come here to breath in a bit of knowledge, we can share again at some point. We were impressed already by the big stone tori gate inviting pilgrims and visitors to the temple. Through the young green leaves a red building was flashing – the 5 storey pagoda which was just amazing once we stood in front of it. To the right is then the temple. For the record: the temple is directly opposite of the botanical greenhouse. 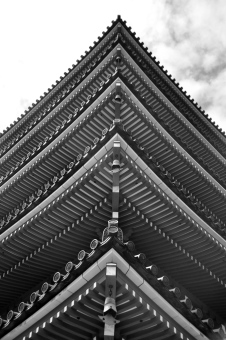 The last stop of the hop on-hop off bus is the Katsurahama beach. Do not expect to swim there as it is strictly forbidden and we immediately saw why. The sea is quite rough and if that doesn´t stop you from swimming the hidden rocks scattered across the bay should. Maybe not the nicest beach you will see, but worth a visit. We missed a bit of the classical tourist beach offer (bars, restaurants…). At the end of the bay there is shrine with a nice view over the bay.

Japan in general has one off the best cuisines we had the chance to taste. What makes Kochi special is sea food (Bonito and Sashimi to name a few of our favourite dishes). Prices are similar to everywhere in Japan, that means a normal meal, i.e. classical Japanese “set” under or around 10 €.

Sunday is world-wide the most common day for a street market, isn’t it? For once the schedule was on our side and we were in Kochi on a Sunday – the day of one of the largest roadside booth stall markets in Japan. And we had great fun buying and tasting different food, guessing what kind of food is what, marvelling at sharp Japanese knifes (Simona wanted to buy one, but with so many months on the road to go it wouldn’t be such a good idea – next time 🙂 ) and just enjoying the market-vibe.

This is actually an attraction that can be easily overlooked. It’s comprised of 3 parts: the red bridge, the couples statue and the electronic clock.
The bridge is an eye catcher because of its bright red colour and is a popular photo spot so you won’t miss it. In the past it was used as a private access for rich merchants. Today – I already told you its purpose: looking good on pictures.
Right next to the bridge is a statue of a couple and as usual when a couple get a statue, it’s because their love story had a sad ending.
Across the road is the famous but easily overlooked Karakuri or automatic clock. Every hour it starts to blink and play music and from all four sides Kochi attractions appear: Harimaya bridge, Kochi castle, Katsurahama and a group of dancers.

The bridge and the statue

Looking good on pictures (with the clock in the back)

After all that sightseeing we (and probably also you) needed some food. Check out Hirome market right in the center of the city. It’s a big indoor market where tables and chairs are placed throughout the market and you can buy any food you like from different stalls and eat it at a random vacant table.

He’s one of the most important figures in Kochi´s history who lived at the end of the Edo period. The statue stands on a green peninsula in Katsurahama Beach park and faces the ocean.

If you see a hat or a UFO (like Jure), judge for yourself, but one thing is for sure: this is one of the best pastries I had in Japan. The top round part is soft, while the brim is crispy and sweet. Om nom nom …

Everyone told us, this is the best time to visit Kochi (beginning of April), but this is true for Japan in general, because of cherry tree blossom. Maybe Kochi is a bit off the beaten track, but some people seek exactly that and they wouldn´t go wrong with choosing Kochi.

5 thoughts on “How to enjoy Kochi”