Leaving Tokyo behind, we headed south to the hills next to Mt.Fuji in the Shizuoka prefecture. We had to change 3 trains – first we travelled on a Shinkansen, then we changed to a JR express and we ended up on a local train, which sometimes has a steam locomotive. The landscape changed dramatically – skyscrapers changed into high trees and concrete to never-ending tea plantations.

Our destination was the small village Jina. Old farmhouses sat on the banks of river Oi, surrounded by blooming cherry trees, deep green tea plantations and all together tucked between hills and mountains. This is old Japan, traditional and tranquil.

We came here for 5 reasons:
– stay in a traditional Japanese farmhouse
– dive into hot waters of an onsen
– ride the hill train
– ride the old steam train
– hike 2 trails: mystical and adventure

Staying at a traditional farmhouse

Thanks to our Japanese friends at JYH we found this little gem called Kawane YH, which is actually an old farmhouse transformed into a hostel. The open fireplace was a highlight and watching Mr. Kitada prepare our dinner was like in a documentary. The living room´s centre peace was a Japanese table with a surprise – under the table was a hole, which allowed room for legs, with an IR-heater. How cool is that?! Ok, if you’re from Japan it’s like rice, but for us foreigners it’s totally inventive. The bathrooms are also old Japanese style – men had a wide shallow bathtub, but for women the bathroom was very special. The normal shower with a small plastic chair was there, but the bathtub was a deep wooden barrel. I totally enjoyed the bath as I never ever experienced something like this. Although it’s an old renovated hose in a traditional style, the toilet is, like everywhere in Japan, super modern.
If you’re looking for an off the beaten track destination, here it is – we were the only foreigners in all 3 days.

Dive into hot waters of a traditional onsen

Onsen is a typical Japanese bathhouse and the one in Kawane is pretty famous among locals – it’s the only one from which you can see a steam train pass by. We went to an onsen for the first time, so we had absolutely no clue, how this works. We followed the philosophy »monkey see, monkey do« and just imitated the locals. And yes, if you wonder, you have to wear your Adam or Eve costume. 🙂 Oh, but don’t worry, it’s not mixed.

At Senzu station trains shine in bright red, waiting to take passengers high up into the mountains. Known as the Ikawa line, this is the only rack-and-pinion operating railway in Japan. Although all the explanations are in Japanese, it’s a fun ride over 51 bridges and through 61 tunnels. Before the steepest ascend they have to add an additional locomotive in order to push the train up the hill. We were allowed to get off the train and watch how they attached it. If you want to get off the train and hike the green mountains around, just buy a ticket to the station, you want to get off. We did this twice – fist when we went on the mysterious hike and the second time for the adventure hike. 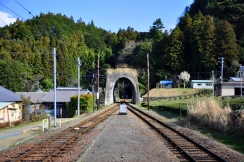 First we went for the shorter mysterious trail. When you get off the train at Nagashimadam just head down the hill towards the dam. Although the big gate might be closed, you can open it and walk over the bridge, catching some water spray from the falling water of the dam. Once on the other side, cross the camping ground and go to the tunnel. Yes, here it gets mysterious. The tunnel is pitch black (bring a torch!) and everyone who knows me, knows how terrified I am of darkness. I grabbed Jure´s hand almost breaking it and said to myself: »You’re a big girl, walk now through and don’t be a sissy.« So we went. I tried to remain calm and it worked until a giant illuminated frog popped out of nowhere. At first I almost jumped on Jure, but then I found the frog family pretty funny and nice. In the middle of the tunel beautiful violet lights lead the way when it got dark again. In the second section of the tunnel a surprise is waiting for you. 😉 You will have to see it for yourself, I am not going to tell you. 😀 Again out in the daylight, we hiked down to the APT Ichishiro train station.

Surprise!
The second trail is the adventure trail – we got off on the Okuoi Kojyo (Lake station), from where we had to walk over the bridge, up a hill (from where we got rewarded with a gorgeous view over the railway bridge and the island in the middle of the lake, From there we walked just down the hill on the other side (follow the road), till you get to another bridge. Cross it and don’t be too confused by the only-in-Japanese-signs. Just turn left and walk over more bridges. I guess the trail is named adventure trail because of the last bridge – a long and steep hanging bridge over a gorge will definitely put some fear into your bones. Not far away is the train station on the other side of the river – so actually I lied before, this is the last bridge of the trail – sorry. We arrived to a small village – one restaurant, one train station and one museum. From here you can take the train or the bus back to Senzu – we went by bus. Back in Senzu, which is by the way a lively village, especially when a steam train departs or arrives, you can again choose between the steam train or the normal train.
If you want to have an itinerary with a timetable and prices, scroll down. We can tell you ours, which worked out perfectly. 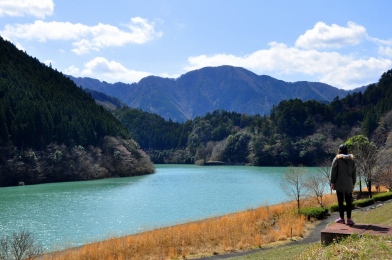 The views are incredible

Choo-choo was echoing from far away when we saw a black cloud rising into the blue sky. A black locomotive had a hand full of wagons attached, waiting to hit the road (actually the railways) again. It started to operate in 1931 as a cargo train for bringing building material for the power plant and Dam construction. When these were finished, they used the line to transport logs from the nearby woods. Today it is a big attraction among the Japanese and a very popular tourist attraction. The views we got through the window were magnificent – never-ending tea plantations, bridges, the river and hills covered in green forests. Now and then a blossoming cherry tree was making itself visible among all the other green pine trees.

Today we should be in Georgia. Instead of being in a new country, we go through our memories from our past trips. Luckily I'm good in latergramming 😅 Any trips you had to cancel due to this situation? • • Photo from Nusa Penida, August 2019. • #stayathome #slovenianstravel #indonesia #nusapenida #balibible #bali #couplesgoals #coupleswhotravel #beautifulviews #inlovewithhim #vacationgoals #travelcouplelife
Last summer we returned to Bali after 3 years. On our first visit we didn't like it, now we love it. Like so many others I guess 😅 Who loves Bali.as well? And who plans to go there after all this? 😎 • • #stayathome #slovenianstravel #bali #ricefield #ubud #tegallalang #asiatrip #coupleswhotravel #wannagoback #lovebali #indonesia #islandlife #paradise #greennature
Happy to be togerther in this 🖤 Who are you spending this isolation with? And who do you miss the most? • • Slika je nastala septembra 2019. #stayathome #slovenianstravel #bled #slovenija #slovenia #europetravel #secretplaces #coupleswhotravel #travelcouple #travelcouples #kisskiss
We miss you Slovenia 🖤 Self isolating in Austria, we still miss our family and friends in Slovenia 💙 Let's hope we can recreate such fun photos this summer at our tiny but charming seaside 💛 Stay positive and healthy 😘 #stayhome #slovenianstravel #slovenia #piran #slovenija #seaside • • #travelustcouples #coupleswhotravel #travelingcouple #wanderlust #darlingescapes #spring #traveltagged #stayandwander #traveltogether #travelawesome #happy
Alone. Before something isn't taken away from us, we don't know how important it was. This happened to us 2 days ago. We can't go to Slovenia anymore (we live in Graz), unless we go in quarantine for 14 days after returning to Austria. We always had this freedom to be able to rerurn home, just to be in our country. This is the first time, this was taken away from us. Although it doesn't seem like a big deal as we are social distancing anyway, but it had an impact on our mind. After all, we are alone in a foreign country. Stay safe and healthy and can't wait to hug everyone of you 🖤 xx Photo by @nellystraathof #letmeshowyoumypartoftheworld
This winter I finally got to iceskate on a natural lake. And not just any - the beautiful Weissensee in Austria is one of the biggest frozen lakes in Europe where you can iceskate. 💙 • • #slovenianstravel #austria #österreich #kaernten #iceskating #frozenlake #winter