Have you ever been in a place far away from home, but had the feeling being there before? That happened to us on Shodo island. We also did an experiment with our Facebook followers and posted a photo collage of the place asking them where we are. The answers were as expected (and as we felt): Greece or somewhere in the Mediterranean.

The island is famous for 2 things: olives and movie village.
Movie village? Our thoughts exactly 🙂  They filmed a famous Japanese movie (Twenty four eyes) on this island so people from all over Japan flock here to see the scenes (similar as Goriška Brda in Slovenia where a Slovenian series is filmed, about which we also did not have a clue 🙂 ). We didn’t see the movie that’s why we concentrated on other things to do.

Back to the olives: They recreated a Greek village in the Olive park – white houses with sky blue round roofs stand out of the hundreds olive trees, amphitheatre-like terraces  and even a big white windmill let you easily forget you’re in Japan. Of course all kinds of olive products are sold there and, most importantly, I spoiled myself with an olive ice-cream. It was different, but I think vanilla was added, because it was still sweet. 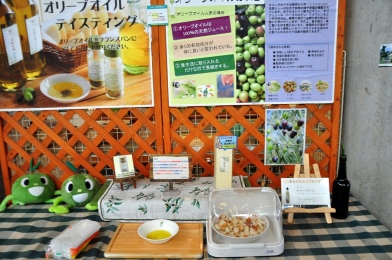 On a very unfriendly and rainy morning we decided to visit the soy sauce factory. We eat so much soy sauce on our travels and also at home, but we had no clue how this delicious and important ingredient is made.  On the island is a soy sauce village, but we headed to a particular factory. Unfortunately we can’t tell you how to find it, because we got lost a few times searching for it until a nice lady packed us in her car and drove us there. This is pure Japanese friendliness combined with their efficiency.

While looking for the factory we got lost – this is what we found. 🙂

While looking for the factory we got lost – this is what we found. 🙂
Finally at the factory, we had to brush our clothes off before entering, then they took us to a very big cellar-like place, where huge up to 100 years old barrels make all the magic happen. It’s forbidden to touch the barrels because of bacteria (yours and theirs) and to our surprise it didn’t smell bad. Considering the mix of water, salt, seaweed and yeast being in a wooden barrel for up to 2 years with an open top it could smell like hell, but no, it doesn’t. 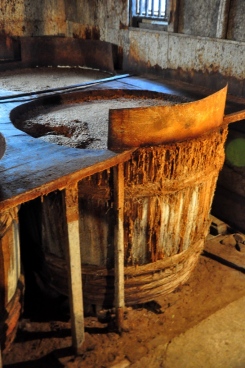 After seeing all this, it was time for some tasting – 5 different sauces from different barrels, different extra ingredients and different time of ripening. They poured just a little into a cute plate, we dipped our fingers and licked the dark liquid. We decided to buy the one with the citrus kick, as it’s very rare and special.

We were lucky again and caught a tenobe somen noodle master at work. He was just stretching the noodles, when we passed by, and again – as the Japanese would compete who is friendlier – he invited us to take a better look and explained a bit (as far his English allowed). The tenobe somen are one of the three major Somen noodles in Japan. Originating around Nara, a farmer who was in this area learned the technique and brought it to the island. No, not last month, about 400 years ago! The noodles are still stretched by hand (we saw it with our own eyes) and the Shodoshima somen are so special, because they are stretched with local sesame oil, which gives the noodles a distinct flavour and sponginess. You don’t have to ask, if we tried them – of course and they’re delicious.

There are two more points of interest, but this time the weather won and we didn’t go there. One is a cable-car over a gorge, the other is a monkey park on the way there. Because it was raining heavily and it was foggy you could not see your hands in front of you, we knew we wouldn’t see much of the gorge.

And why we visited this island? Probably not because of the Mediteranean feeling, coming from a country with very good extra virgin olive oil. We came because of the Setouchi art trienale, but again, thank you weather, we didn’t see as much as we would have liked to.

The island has some nice beaches and in the summer months I can imagine it’s very popular among the Japanese. Finding affordable accommodation can be difficult, that’s why we stayed in another JYH called Shodoshima Olive Youth Hostel. It’s not the most modern and new house, but the Japanese style rooms are bright and with some luck you’ll have sea view. The food (breakfast and dinner) was very good and tasty – one night we even got sashimi!

All in all, the island is lovely and I would love to come back in summer or early autumn to catch nicer weather for hiking, cycling and swimming.

Oh, and even getting to the island is fun – just look at the ferries and trains operating here. 🙂 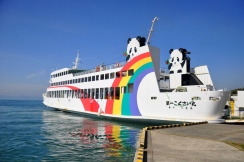 Grateful for this this morning in the desert 🧡
Spent the past few days in the Sahara desert between the endless dunes of orange sand 🧡 How do you travel in the desert? See the second picture 😉
The blue city in Morocco is really blue 💙 Sooo loved walking around, but enjoyed this fresh orange juice at @saidayach1 even more 😉
Getting lost in Fes Medina ❤️
Good morning from heaven 💙
We spent the last weekend at @hochkoenig on a gourmet skiing weekend. We skied from hut to hut and had different courses in different huts. The weather was perfect as well, the slopes were amazing. What a treat it was ❤️ Oh, and guess what - they have excellent vegetarian and vegan food. Swipe left and you can see delicious vegan food in the ski huts 🥰