After our jaw dropping safari through Serengeti and Ngorongoro and our heartbreaking visit to the orphanage Kibowa, it was time for some vitamin sea. 😉
And if you’re in Tanzania, you know where to go to – Zanzibar.

All Slovenians know the island from the song by Čuki, where the island is described as »palm trees, bananas and coconuts on the blooming island«. Because we were limited with time, we had to make a decision – which part of the island should we stay at? You have to know, that the island is pretty long and transportation depends on your budget: dalla dalla is cheap, but it takes ages, taxi is effective, but is pretty expensive. So one way dalla dalla and going back a taxi. We decided to head north – Nungwi and Kendwa.

The biggest city on Zanzibar isn’t like other African cities we visited. Because it was often under foreign domination, you can see different influences especially in the architecture (but also in food and dress code). Beautiful doors give you a hint that Arabs were here, around the port British and Portuguese traces will pop up if you know where to look.
The town has a vibrant history with two major trade goods: spices and slaves.

Slavery marks a dark spot in Zanzibar’s history. It was the most important slave market in eastern Africa, and was opened till 1873, when the Brits shut it down. We went to the museum where  our guide explained horror stories of people, shipped to the island, thrown into dark, smelly dungeons for days, when they were brought to the central market, tied to a tree and beaten (usually with a stinging branch) to test their endurance. The better the slave took the beating, the better price he reached. Today this is not a market anymore, but a big Anglican Church. 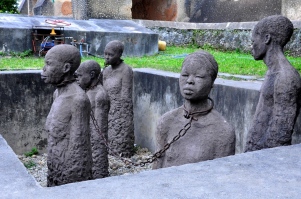 Slave monument
The guide told us a funny story about the church: the bishop Edward Steere was in charge of the construction site, when he had to leave for an appointment. The people building the church were former slaves, so no construction workers. They erected pillars upside down and when the Bishop returned, it was already too late. They still stand upside down 🙂

The house of wonders is a beautiful building right next to the waterfront. This building is important because of a few fun facts:
– The tallest and largest building in Stone town
– First building on Zanzibar with electricity
– First building with an elevator in eastern Africa

An evening stroll is a pleasent way to end the day – treat yourself with fresh sugar cane juice, Zanzibar pizza, seafood and hold your breath watching locals jump into the ocean from the walls. 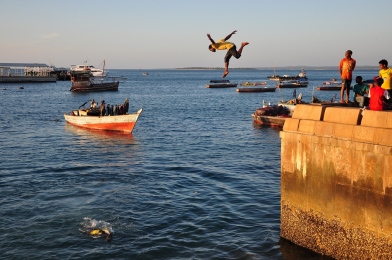 i believe I can fly 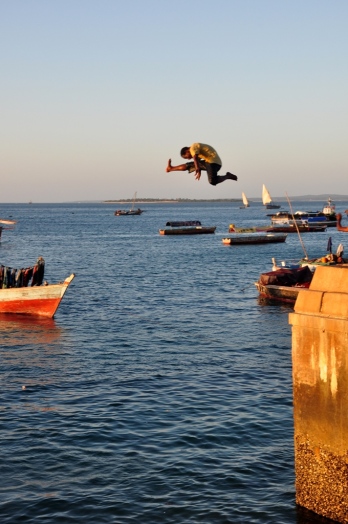 The northernmost village on the island is Nungwi. It’s not particularly big, but we decided to go here because of a nice hotel we found (Mnarani beach cottages) . There are Portuguese ruins, which we wanted to visit and the most important reason: it’s near to Mnemba atoll. But be aware – here the difference between low and high tide is very big, so don’t expect to splash in the ocean the whole day.

Things to do in Nungwi

Rent a bicycle
We explored the nearby villages and it was totally different to, let’s say Asia by bike. Here all the children were screaming Mzungu, some were running towards us, some crying away. We had some gifts for them, but giving it was a challenge, unless you want to be the reason for a stampede. Also taking pictures was more difficult than in Asia – we always ask before we photograph people, but here usually the answer was no.
We won’t forget the boy, we named him little hunter – he had two birds: one ready for the grill, the other was still breathing. He proudly showed us his pray and posed for a picture. 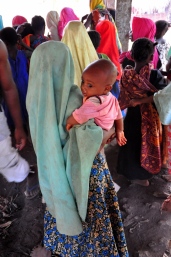 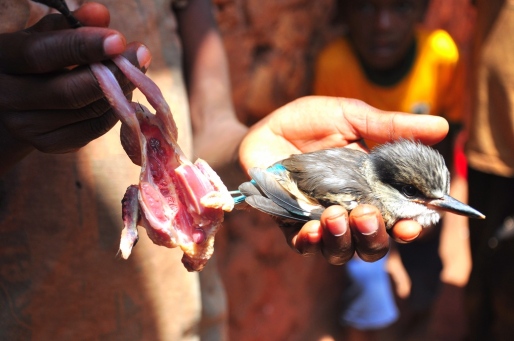 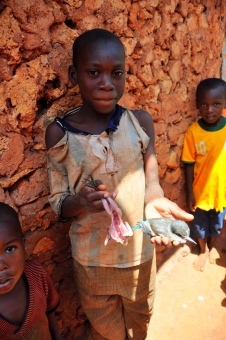 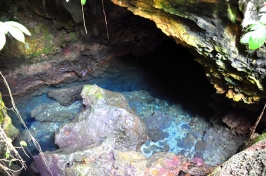 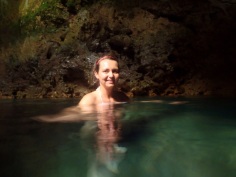 Eat like a king
We really like sea food and here we ended up eating it a lot. 🙂 This lunch plater was around 20 USD, but look at it – sea food, vegetable, chicken etc. Mmmmmmm … why haven’t they invented teleport yet?

Visit Mnemba Island
Mnemba is an island 4 km of the Zanzibar coast. It is unfortunately privately owned with astronomical prices for a normal traveller (1200-1600 USD per person per night). You are probably asking, how we managed to visit it? Easy, you can snorkel around the island as much as you like, just make sure you don’t get on shore – you will be fined. Rent a boat or go on a tour (around 35 USD with lunch), and they will take you there, show you the best spots to snorkel, cook a delicious lunch for you and take you to amazing sand dunes caught in the ocean, which are only exposed during low tide. 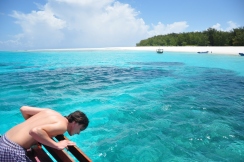 Get ready for some good snorkelling

Get ready for some good snorkelling

Oooo, Kendwa, we had such a nice time here. Compared to Nungwi it has more resorts, bars and shops and the most important fact: the high tide – low tide difference is minimal, due to steep shore.  Here you can enjoy resort style vacation, you can swim all day long, snorkel offshore, watch fisherman do their work, shop for souvenirs or get a massage on the beach. There are no options for budget accommodation, but being directly on this beautiful beach was priceless. We choose Gold Zanzibar Beach House & Spa and had an amazing time. 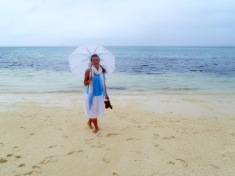 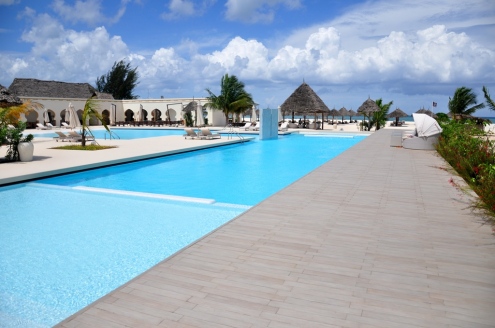 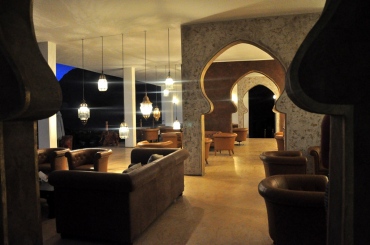 One thought on “Zanzibar”