Usually people write and talk about the joys travelling gives us. But we experienced also some sad and heart-breaking  moments on our travels, which still bring tears to our eyes and  pain to the heart.

In the heart of Tanzania lies a town called Arusha, the gateway for safaris to Serengeti and Ngorongoro. Outside this busy and dusty African town is Kibowa, an orphanage for children whose parents died of AIDS. Two women, Sifael Mchome in Amine Ramadhani, take care of the children – some are infected with the virus, some aren’t. But they all lost their families and were almost forced to live on the street. Today Kibowa takes care of the children in the meaning of accommodation, education and after all they are all a big family.
When we arrived with two big bags of school supplies, the courtyard was empty and all the children were in the classroom. We entered as they assured us it’s ok (but as teachers we know how disturbing unannounced visitors are). They already were at the end of the class, doing maths exercises. We sat down, right away we had a child our lap and helped them with their exercises – they used rusty corks for addition and subtraction. After finishing, we went out to play. One ball and one sock curled into a small ball and a dog. They invited us to their rooms, girls and boys separated; we took a look at the bathroom and had a chat with the “big mamas” in their office. They take good care of them, but we could see and feel the children need more … The scar of losing your loved ones so soon can be deep and their eyes couldn’t lie.
When it was time to leave, they waived smiling to the ears, but I was barely holding back my tears.
If you also want to visit Kibowa – get in contact with Shadows of Africa, an award winning tour operator, which sponsors and helps the orphanage.  They can arrange just a visit, help you with a volunteering position or provide a whole safari itinerary for you. 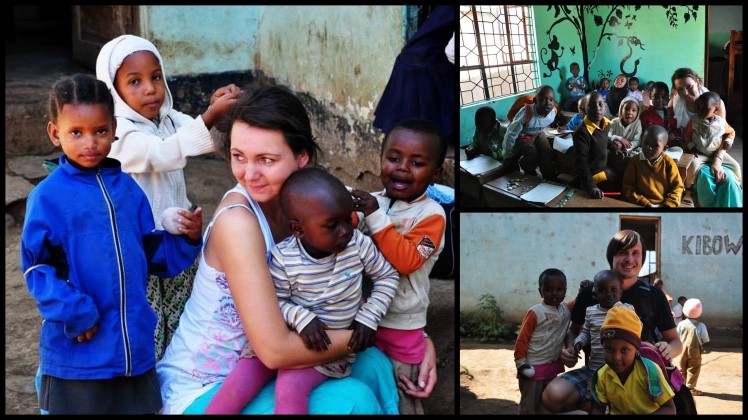 Everyone who visited India knows, there’s a lot of sadness there. Old people work very hard till a high age , begging children, but the most striking for me were the people on the side of the street, lying motionless – were they just sleeping or were they … I still don’t know, but the life flow on the street took its path not bothering about the ones who stayed behind. The excuse of locals: “He probably did something wrong in his previous life, that’s why he has to suffer in this one”. Yes, it’s their way of understanding life, but for me it was hard to see so many people suffer. India is still an amazing place, but for my inner conscience it’s just too heavy. 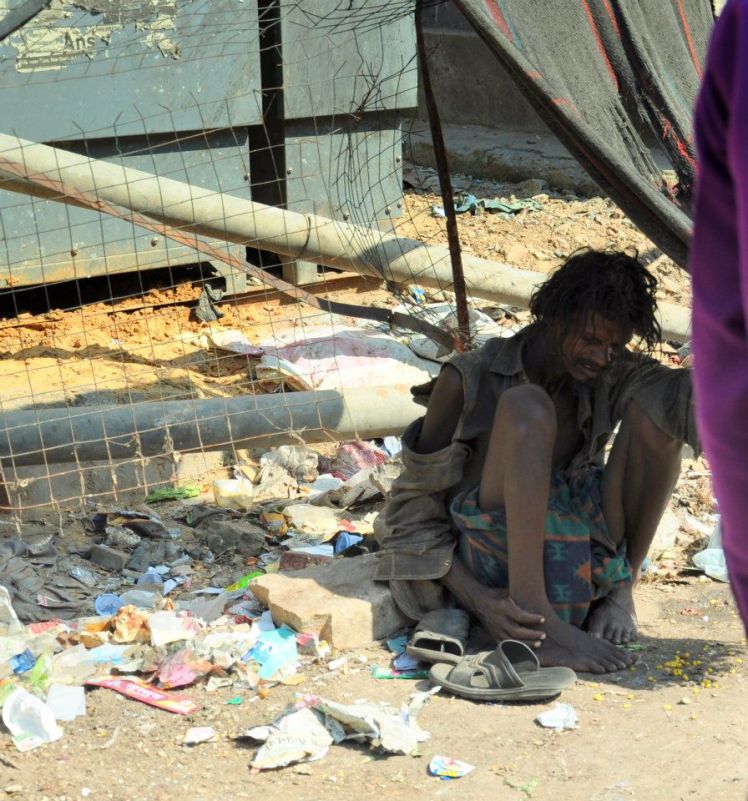 Dark skinned people with facial shape I haven´t seen before are the indigenous people of Down Under. I was very curious before meeting them, but it was totally different as I imagined. My first impression was that they are angry and they don’t like us, white fellas – of course not, would you greet your repressor with open arms and a smiling face? After reading a lot about them, learning about their culture and hearing their creation stories, I felt sorry for them. They are not angry, they are lost. They lived their way for centuries, now we came, took their land, their sacred places, forced them to live in houses, wear clothes and operate with money. They are lost in our world, which is probably totally alien to them. One of the saddest sights was also the rope up the Uluru – although it’s their sacred place, people still want to climb it and some still do. 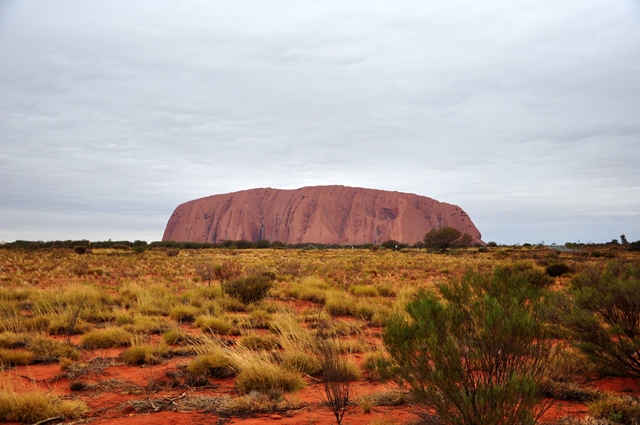 We love diving and snorkelling and we are totally fascinated by this surreal underwater world. And we really hope it will stay preserved for the next generations.
But what we saw in Colombia was heart breaking – when we arrived at the reef, dozens of boats were anchored IN the reef. Once under water, we could see all the broken and destroyed corals and it made us cry even underwater. When we came back to the boat, we asked why do they do this – the answer was: “It’s ok, don’t worry, didn’t you see all the colourful fish?” When we said, the corals are dead, their explanation was – yes, but they are old. We couldn’t believe our ears. 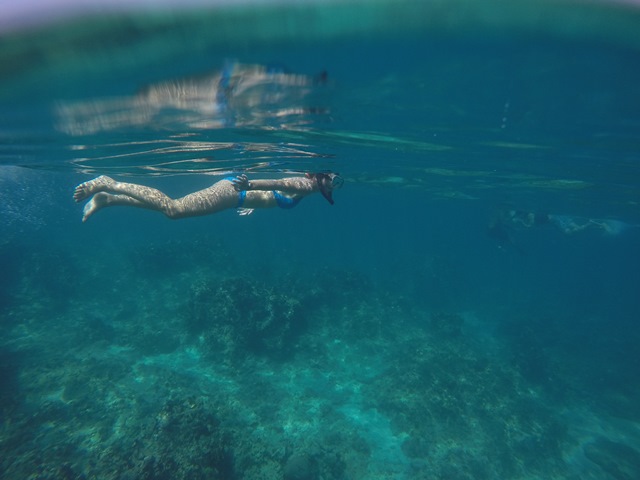 Not finding a single rhino in Ngorongoro

Ngorongoro is a very protected and geographically very isolated game reserve. It’s home to the black rhino, a very endangered species. Supposedly 26 of them should live in the wild life reserve, but our guides told us otherwise. Last time we saw one was 3 weeks ago … Well, not very promising. And as a cherry on top of an ice cream we heard an African say: “Their horn is good medicine” This was just like a slap into the face of everyone, who tries to make people aware of their extinction.

We weren’t worried about arriving to Down Town LA at the middle of night at all, but once there, a cold shiver went down my back – and not because of the rain. The sidewalks were full of people sleeping on cardboard, some even had tents. The ones awake looked at us like we were aliens. Not one cab was there, so we had to wait for the bus. When he finally arrived, the driver was also stressed saying: “Hurry, come in, come in.” On the bus were around 20 people – some sleeping, some just staring into nowhere and some talking to themselves.  A woman was constantly arguing with shouting “She said …, and then he said …”. It was just heart breaking seeing so many people homeless and mentally damaged in the land of dreams. 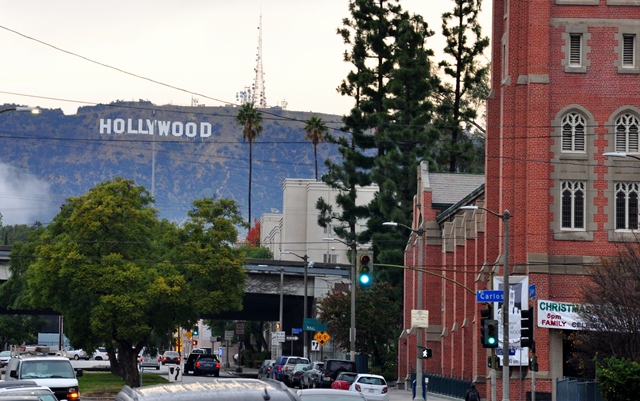 We were in Bago and it was raining cats and dogs. Cycling wasn’t an option, so we hired a local motorbike driver. He spoke English well and he knew a lot about the temples and history. Soon we found out he’s a retired teacher – bingo! – We desperately wanted to visit a school and he was our entrance ticket. Without too much thinking we drove to a monk school and – second bingo! – it was their 1st day, when all the new pupils were initiated. They treated us like stars (and our guide was so proud): we got lunch, first row seats at the ceremony and we were interviewed by a local TV crew. We had an amazing day, so we gave our guide/driver/new friend a bit more than agreed in the morning. 15 USD. He’s reaction was heart breaking: “Thank you, thank you … Be aware that you just fed 2 families for 2 days.” We were shocked. It was already evening and we had to say hello to our families, so we went to an internet café – in that time in Myanmar had no cell-phone reception, no wifi and internet was very limited. 30 minutes later he stood next to us. His hand reached into his pocket and pulled out a coin and a bank note. “For you, souvenir.” were his words while giving us his present – old Burmese money. We were speechless. We didn’t have anything to give him in return, but he just smiled, so bright and honest, swung his hand, turned on his heels and disappeared in the rain. It was heart breaking to know, he taught all his life, gave so much knowledge to the children and doesn’t get enough money to survive 1 week in a country where a simple meal costs less than a 1 USD. 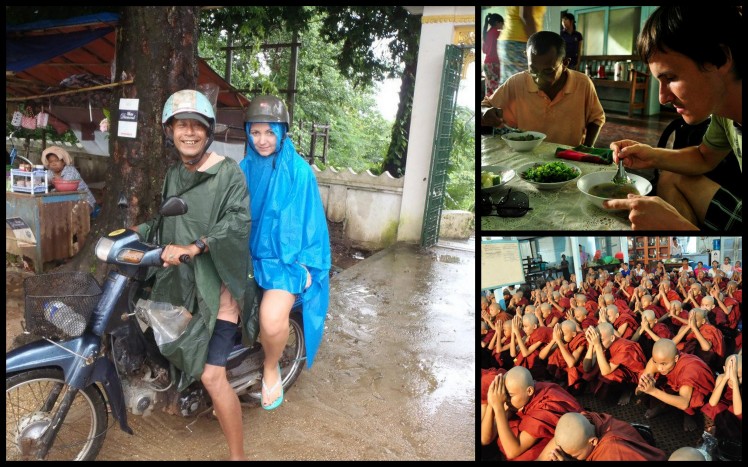 The weather felt our mood sending gallons of raindrops when we entered the horror concentration camp under the sign “Arbeit macht frei”. 1.1 million people died in Auschwitz, 90% of them were Jews. Being there in autumn gave the place the right atmosphere – dying leaves falling from empty trees, foggy grey days and a cold wind drying silent tears. Our steps were heavy, when we entered the gas chambers. People died hier … Right here. On the walls white marks remain from the terrifying agony – scratches are cut deep into the concrete. Shocked by all the exhibits our lips stayed pressed tight together. For me the two most devastating rooms were the ones with hair – whole braids were lying on a huge bed of human hair. The second room which made a deep impression on me was the one with suitcases – names from real people were still written on the luggage, which was all their belonging. And even this was taken from them, among their pride, honour and at the end their life.

40, just 40 years ago an insane man under the name of Pol Pot used his political party the Kmer Rouge for a genocide, which erased at least one fourth of the people. S-21 was a prison, where people were inhumanly tortured, after confession they were sent on their last way to the Killing fields, which was the main extermination and mass burial ground. A pagoda full with skulls was erected at the killing fields, where you can still visit the mass graves. The S-21 is a genocide museum with heart breaking pictures, disturbing torture tools and blood remains. The air almost stands still in this building, making it difficult to breathe normally. The walls are silent witnesses carrying all the screams, broken souls and sadness with them.

On our first trip to Thailand back in 2008 we were convinced the Tiger temple near Kanchanaburi is a blessing for all the tigers there. The monks take good care of them and when they’re ready, they’re released into the wild. We decided to go there and see for ourselves. But being there, something didn’t feel quite right. “Volunteers” dragged us from tiger to tiger, stand here, sit there, smile, taking pictures so enthusiasticly even a gorilla would make it better. And the tigers? Lying, half asleep or acting pretty uninterested. How is this possible for a predator? Our conclusion was – they have to be drugged. Afterwards we discouraged people to visit it and this year was just heart breaking to hear all the news that have proven our suspicion.

The first atomic bomb ever used in the history of mankind. USA dropped “Little boy” on Hiroshima 71 years ago, killing thousands. Today one building still stands in the centre of the city, a peace park full of cherry trees invites to deeper thinking and the museums tell the story again. On a sunny day volunteers are at the dome teaching people fold paper cranes – the symbol of innocent victims of the atomic bomb attack. Seeing all the pictures, knowing the horror story which happened just 71 years ago, standing on ground zero is heart breaking. Folding a paper crane helps. 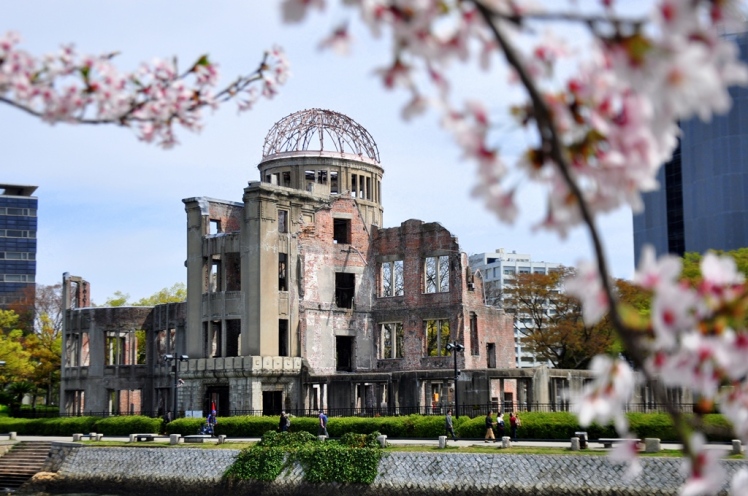 3 thoughts on “Our heartbreaking experiences while travelling this world”