During our skiing week in Zillertal Arena we decided to check out the apres ski scene in Gerlos. We never went to a proper apres ski in Austria before, so we were quite curious how it’s like.

When you are still on the slope, you should not miss Seppi’s, the oldest Ski hut in the region opened in 1967. The food here is really good and if you’re done with the snow for the day and just want to have a beer or two and enjoy some music, Seppi’s big umbrella tent has all that for you.

Later in the day, after the lifts close and everyone is happily tired from another good day on the slopes, it is time for some proper apres ski. Friends who live and work in Gerlos pointed out 3 bars we have to visit. So we did and we’re sharing this priceless information with you here. 😀

Everyone was talking about Cin Cin. We thought what was all the fuss about it … until we visited it. A wooden chalet with the bar in the middle and the DJ above it. Everywhere are Dutch signs, everyone speaks Dutch and the music is – what a surprise – Dutch as well.

This was the second bar we visited and it had the craziest people and DJ. The bar is again in the middle, the DJ is on the other side and a TV with music videos is playing above the danceflor. Here we found out that Austrians, Germans (and probably Dutch as well) come to skiresorts in larger groups, with same T-Shirts and a “group nickname” – in this evening we met the “Pistenhexen” (Slope witches). 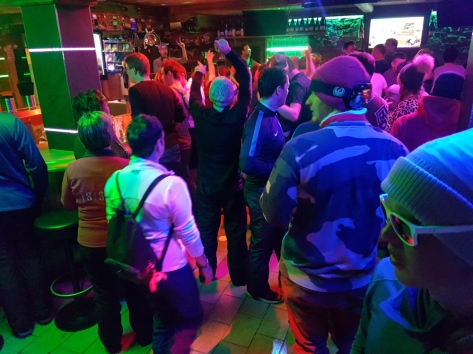 If Cin Cin was a Dutch hot spot, we expected this to be an English one. But no, we didn’t find a lot of English, therefore again lot’s of Dutchies. This bar is in a hotel cellar and I had a feeling we had the most space to dance.

Thanks to this evening Jure has 2 new favorite Apres Ski songs and we learned one Dutch song. To get a feeling how they sound like, here you go:

2 thoughts on “Apres ski in Gerlos aka little Holland”