Today is a big day in Slovenia – St. Martin´s day. Today the grape juice becomes wine. And although we´re in South America, we celebrated a bit. We visited the oldest winery in South America named Tacama.

It´s about 20 minutes’ drive from central Ica (don´t pay more than 10–20 soles) and the tour and tasting are free. The only thing is, you´re expected to buy some wine, but they have reasonable prices.

Fist you´re showed a short movie about the winery and the wine making. The land, where the winery now stands, was once owned by the Incas (the same ruler Inca Pachacutec who build Machu Picchu) 100 years before the Spanish arrived. But first the land served as a coca plantage.

When the Spanish arrived, it became their property, and in the 16th century it was planted with vine from the Canary islands. Why did they create such a winery here? They needed wine for religious purposes. But in 1776 the Spanish banned Peruvian wine export to protect their wines, so the locals started with distillation and Peruvian Pisco was born – a grape liquor. First known only to Americans, it became famous after the writer Kipling mentioned it in his novels.

The Olaecha family, which still owns the winery (4th generation), bought it in 1889. After WWI they hired French experts, bought French casks and technology and soon they became one of the best wineries in the world. Important notice: they use SLOVENIAN oak wood for the barrels. How cool is that?!

Today they export their products to major wine producing regions like France, Spain, Italy and the USA.

After the movie you´re guided through the cellars, small museum to a lovely blossoming yard and further to a tower from where the whole property can be seen. The tower has its original bell dating 1815, which was used for communicating with the workers (break, lunch …).

After so much information, the best part followed – the tasting. We got 5 samples; I was again an exception and got 6. 😀 The first one was a dry sparkling wine, which was to my surprise very good (I usually fall for sweet wines). The second was a dry wine, which had a great scent but was way too dry for my taste. The third was a dry red wine and I got also a semi seco red one, which was more to my taste. The fourth was a rose. And the last one was pisco – a very strong (43%) colourless liquor. way too strong for me, but you can make an excellent refreshing cocktail with it: http://tacama.com/en/products-recipes.php.

Luckily (or unfortunately 🙂 ) they don´t give amounts like in the biggest Slovenian wine cellar Brda. The only thing we didn´t really like were the plastic glasses used for the tasting.

The best wine Don Manuel can´t be tasted, but it´s on sale. I was really sad, we have that limited amount of space for new things, as I would love to buy more than just that one bottle, which we´ll have to drink on the way.

We can really recommend a visit to this winery, regardless if it´s St. Martin´s day or not. 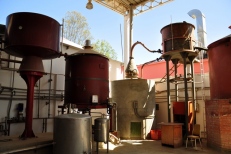 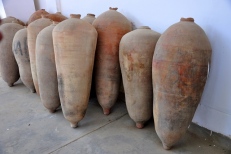 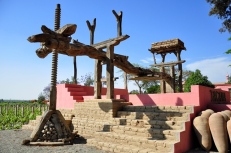 Old fashion press – like Slovenians know from the old times 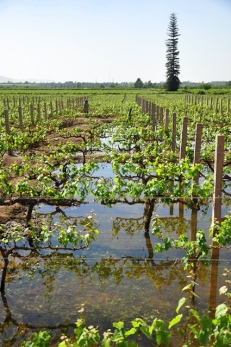 Us at Tacama winery – What do you say about my hat? 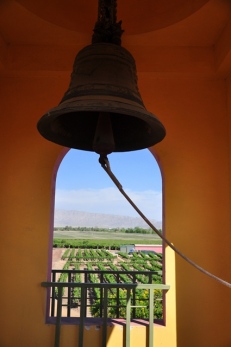 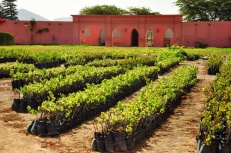